Culture is unique for every organization and it’s about “everything”: performance, competitiveness, innovation, satisfaction, retention, resistance to organizational change…

Marcella Bremer is the co-founder of OCAI online. She uses the Organizational Culture Assessment Instrument (OCAI) to get a quick overview of the current and preferred culture and to help organizations develop or change.

The OCAI is a validated tool, based on the Competing Values Framework, and developed by professors Robert Quinn and Kim Cameron of the University of Michigan. It’s been used by over 10,000 companies worldwide.

You can do a free trial of the OCAI survey. This takes around 15 minutes to complete and is immediately accessible. The paid version is available in 19 languages.

The Competing Values Framework (CVF) is one of the forty most important frameworks used in business (ten Have et.al., 2003) and tested for over thirty years in organizations. It is the most used framework for assessing organizational culture and dynamics.

The CVF is validated by a ton of research (Denison, 1990; Howard, 1998; Deshpande & Farley, 2004), and identifies the underlying dimensions of organizing that exist in almost all human and organizational activity. It aligns with the four biological determined drives in the brain: the need to bond, to learn, to acquire, and to defend. (Paul Lawrence, Nitin Nohria, 2002) and with other dimensions of human behavior (Linnenluecke, 2010; Ralston, Tong, Terpstra, Wang & Egri, 2006; Cameron & Quinn, 2006).

You can read more about its research basis.

The actual OCAI survey maps your culture on a grid with four archetypes of culture: 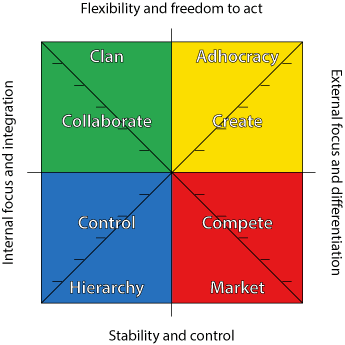 Praise for the OCAI

Jo McDermotPrincipal at Catalyst for Change Consulting, USA
OCAI online's team was responsive and flexible, service was personal and support materials were outstanding. Every step of the process was outlined clearly so I felt like I had a compass to direct me to where I needed to go next in terms of navigating the online process and making good use of the results. 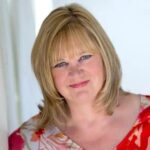 Linda WattDirector Learning & Development & Consulting, University of Guelph, Canada
I was delighted to find a short, online culture assessment that I could easily invite employees to complete. The results were presented in a readable, straight forward report. In addition to the useful information provided by the OCAI, I must mention also how helpful Marcel Lamers was throughout the process. He patiently answered my many questions and cheerfully provided outstanding support, more than once working late because of time zone differences. Thank you, Marcel. The OCAI is a good choice for those who are interested in an Organizational Culture Assessment tool that is user friendly and efficient.

Annette Aubreyconsultant Aubrey Associates Inc., Canada
We have used the OCAI in our organization and found it to be extremely accurate, comprehensive and valuable. After taking the instrument, you can structure a way forward based on the detailed feedback it throws up, towards a more constructive culture. The beauty of this tool is that it gives you all the possible layers you may want - across functions, grades etc. helping to pinpoint every problem area and the solution for it.

Gauri Row KaviSr Manager - Training & OD at Tata Sky Ltd, India
I have used the OCAI with excellent results. The department that surveyed against the direction the company was taking, was the most difficult to work with. It was an excellent barometer of what the future would be as the change unfolded. I didn't realize how important the OCAI survey was until I got to this point in my project. What an excellent tool for anyone working with change management and people! 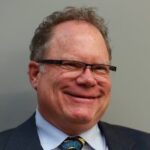 OCAI Online do for you?

We offer a free trial of the OCAI survey. For teams and organizations, we offer paid online culture survey packages, ready to use from our website: OCAI Pro or OCAI Enterprise.

The difference between Pro and Enterprise assessments is simple: the Pro provides one collective overall profile of all participants. The Enterprise allows multiple sub-profiles of your choice to compare departments or levels.

The book and training teach successful culture change with a framework of 7 steps: from OCAI assessment to a quantified, visual profile to adding qualitative examples, raising engagement and awareness, assessing the future, understanding the preferred culture down to the levels of daily behaviors and outcomes, and finally to a change plan that people take ownership of because they co-created it.

You can download the survey set-up manuals and sample reports.